So Belfast is getting included in the global edition of Monopoly then!

Sure we had our own version ages ago!

No ‘Banker’ in our game right enough.

Congratulations to all those involved with the innovative undertaking to celebrate St. Patrick’s day in Portglenone.

Not only does the dyeing green of the River Bann make for a stunning and attractive tourist attraction but I’m sure the environmental lobby will also be delighted to see their concerns ‘highlighted’ in such an appropriate manner.

In other news, mystery still surrounds the overnight disappearance of all the vessels which had been moored at the village marina.

Reports are also reaching us that the marina itself has now disappeared.

Also, if anyone has seen Bann View Terrace in the last 12 hours, could they please contact the PSNI.

Did you know that in 1783, there was a large estate in the townland of Moneystaghan which was built in the shape of the letter ‘R’.

A contemporary Google maps screenshot shows the structure which disappeared following the protracted ‘Patchouli Essential Oil’ uprisings which blighted the area throughout the 1820s.

Many thanks to our eagle-eyed reader who caught this photograph of the lesser spotted ‘Aenrichus Hooverum’ in its natural habitat, The Top Wood on the Finlaystown Road.

Proof, if ever it was required, that nature does indeed, abhor a vacuum.

Just discovered that our bail conditions have been relaxed just enough to allow us to post this photograph taken last night at the mouth of The Clady.

Well, hard as it is to believe, portglenone wordpress is one year old today.

Yes, I realise you have relied on us to help you through such traumas as the bank closing and the war of the Glenone toepath and kept you up to date with the latest news, events, history and culture but due to an expensive and time consuming legal battle between ourselves and Portglenone Health Clinic, we must from this point, settle for regurgitating old posts beginning with the first one ever;

Portglenone is a village which lies just east of The River Bann in County Antrim.

West of the Bann, it doesn’t lie and as a result of being so honest, it is allowed to be known as Glenone.

Glenone is about ¾ mile from the village of Clady but it used to be further. Perversely, Clady is actually in Glenone.

More perversely, Clady is even closer to Innisrush which is sometimes spelt Inishrush and on the signpost in Clady is spelt InisOrangeBastardsrush.

Many thanks to all the cranks, weirdos, cads, bounders and ill-set pups who contributed to our previous 410 servings of utter and complete pish.

Residents of Glenone (2 in particular and you know who you are) received some unexpected support this week in their campaign to keep County Derry ethnically pure.

Tired of watching their Antrim neighbours crossing the bridge and taking advantage of the superior air quality and more interesting mass, the Derry men were forced into taking direct action.

Reeling from the blow that physically stopping all cars and beating up undesirables was actually illegal, the international backing from such a statesman couldn’t have come at a better time. 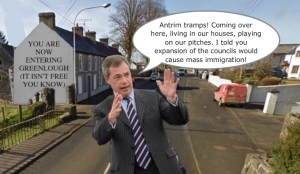 Residents of Loughgreen were extremely off  pissed after this little exchange on twitter involving SDLP Euro candidate Atty Axelwood. 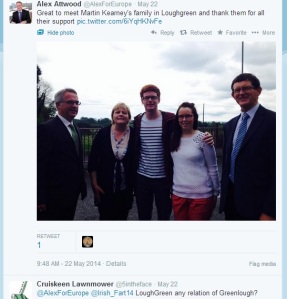 I’m sure that you are all aware by now that the suspect detained in connection with the robbery at Eurospar last weekend was apprehended in Belfast after a high speed chase by Police.

It later transpired that the vehicle the alleged culprit was using was his Grandmother’s mobility vehicle.

But thanks to our regular contributor Hugh Garce, who just happened to be roaming the street in the early hours with a high powered camera and zoom lens, we can bring you exclusive shots of the exciting pursuit. 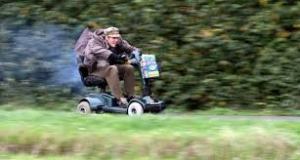 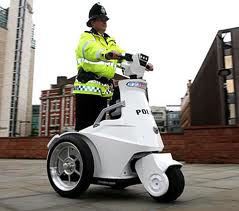 The policeman involved tracked the runaway the whole way from Portglenone to Belfast at speeds in excess of 7mph where a specialised unit of his colleagues prepared a ‘stinger’ ambush.

Congratulations to all involved.

The continuing adventures of Desperate Dan-Joe, raconteur, philanthropist and Glenone man-about-town with an I.Q. almost into double figures. Episode 39.